Smoking is detrimental to health and environment, this is an obvious fact therefore many people are making an attempt to reduce or quit this behaviour. It is a very challenging task to quit smoking altogether. Traditional cigarettes have nicotine, which is an addictive along with thousands of toxic chemicals. Fortunately, electronic cigarettes are getting popular as an alternative to tobacco smoking. They are also recognised as “smokeless vaporizers'. All information about it is on www.eliquidmate.com go right now and find the best eliquids.

What is an e-cigarette?

An e-cig is a device that operates in the same way as conventional cigarettes. Besides functionalities it provides the user same feel and taste that is attained, while smoking tobacco cigarettes. Best part is that it fulfils the user's craving for nicotine but without any bad tobacco smell minus adverse health effect from carcinogenic chemicals released due to combustion. Just water vapour is released, when the e-liquid gets heated. This process resembles the vaporization in humidifier or nebulizer applied for breathing.

These key elements of e-cigs make your device work efficiently.

Cartridge: It is the mouthpiece of your device that looks like a small reservoir containing the e-juice and is made from plastic. The cartridge is opened on both sides one side for your mouth and other is attached to an atomizer. The main function of the cartridge is to allow only vapour (not liquid) to pass from atomizer to your mouth. You can easily replace (prefilled ones are available) or refill empty cartridges.

Atomizer: It is the heating element, whose only aim is to vaporize e-liquid. Atomizer dwells in the middle of your e-cigarette cylinder. It has a filament that needs replacement overtime because the coil tends to burns out completely as sediments accumulate.

Battery: It is the energy source of your electronic cigarette. It is a rechargeable battery made from lithium ion. Battery is the longest outer structure of your device. It can be recharged using chargers like wall adapter, USB connection and car adapter. 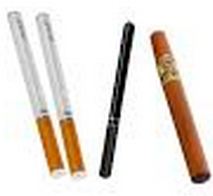 Some people are sceptical to switch to e-cig because they understand their need for nicotine craving can only be fulfilled using tobacco cigarettes even though electronic cigarette imitates conventional cigarette in looks, feel and functions. Actually, e-liquid includes nicotine of different levels, which can be selected as per user's preference and brands.

Socially acceptable, so users do not have to go in search of isolated areas and miss some interesting event indoor