The Concept Behind e-Liquids

As exciting as the e-cigarette is it’s nothing without the vapor. In order to have a dense, rich, flavorful mist emerging from the mouthpiece of the electronic cigarette, it’s necessary to start with a quality e-liquid. Whether it’s pre-mixed and ready inside the cartridge, or something mixed at home these can offer more variety and flavor than the standard cigarette. There’s also variation in the actual amount of e-liquid that each cartridge or fluid tank can contain. This variation is usually listed as strength.

The idea of the electronic cigarette has been around since the 1960’s, but didn’t catch on until the early 2000’s when production of these devices skyrocketed. Because both the devices and the liquid for the vapor can be produced easily, and are more economical to use they have become increasing sought after. Still, many who use this form of smokeless cigarette use aren’t entirely sure what’s in the vapor.

The vapor produced by the fluid inside the e-cig cartridge is dependent on the ingredients used. Naturally the stimulating effect of the cartridge comes from the nicotine, the rest of the mixture delivers the flavor and the density of the vapor. Density is important to the delivery of both the nicotine and the taste. The fluid will contain flavoring, diluents, and ingredients that produce the best vapor. 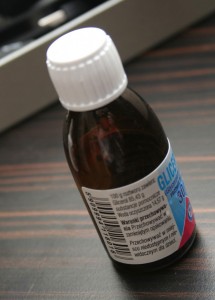 a bottle of nicotine liquid

A few differences exist between the way nicotine is drawn into the body through smoking, and in the use of vapor. There’s also a difference in measurement between the two when comes to this component. An example is looking a package that states each cigarette contains 2.0mg of nicotine. This will mean on average, each one will yield roughly 2.0mg depending on fast the cigarette is consumed, and how many puffs the individual takes before it burns away. The total possible amount of nicotine that could be consumed in the pack is 40 mg, but the person smoking could actually get less depending on how each of the cigarettes is smoked. This is due to the fact nicotine will be destroyed as the cigarette burns whether the smoker draws it in or not.

The nicotine in the e-cigarette if of good quality will be 100%, and since it’s not being consumed even when the user isn’t drawing it in, this is a more efficient way of getting the effects from this ingredient. The person using an electronic device will not get the immediate effect smokers are used to with a standard cigarette, but because the method is more efficient this stimulant will be more evident, and less of the product typically needs to be used to have this effect.

How to Look at Strength

When ordering or buying e-flavorings check to see it the mixture does in fact contain nicotine. Some areas prohibit the sale of nicotine so only flavorings might be sold. If the nicotine isn’t available it can be legally purchased online. Those who smoke more than a pack a day will want to start with a strength in the mid to high range.